How Replanted Seagrass Is Restoring the Ocean 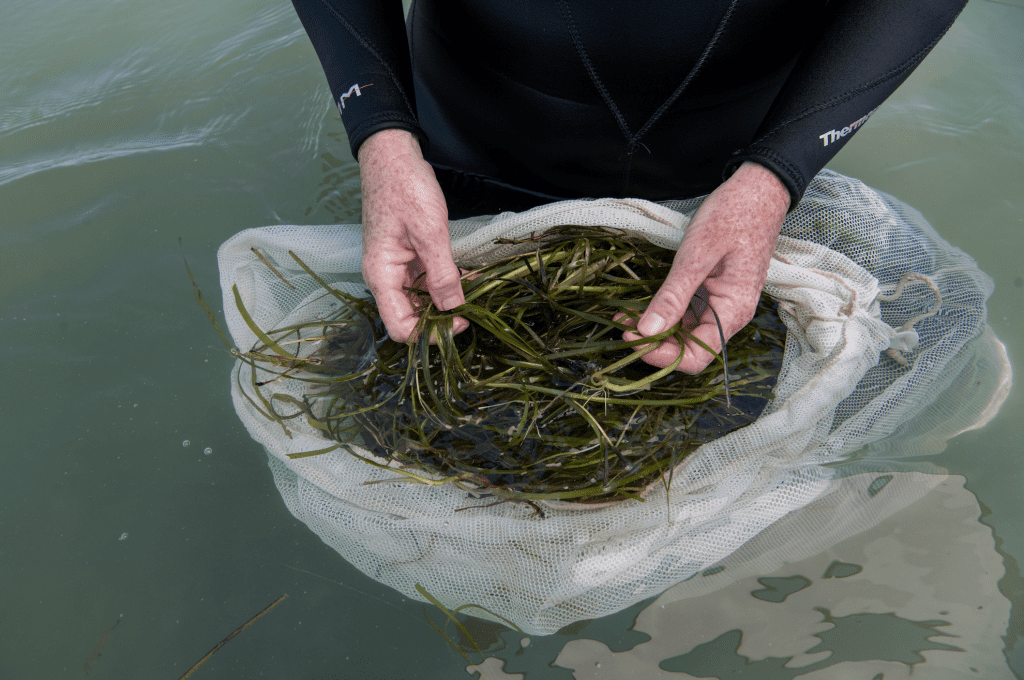 The seeds Orth and his team planted grew into plants which, in turn, produced their own seeds. “Nature kind of took over,” says Orth. Credit: TNC

When Karen McGlathery used to swim in the coastal bays off Virginia’s Eastern Shore, the water would quickly turn cloudy and brown as sediment swirled around her. Now, 25 years later, for as far as she can swim the water remains clear. The sediment is anchored in place by lush green seagrass meadows, teeming with fish, scallops and crustaceans. “It’s like this beautiful underwater prairie,” says McGlathery. “It’s just gorgeous.”

McGlathery, an environmental sciences professor at the University of Virginia, is part of a team running the largest seagrass restoration project in the world in these coastal bays — and one of the most successful. The two-decade-long project is a “blueprint for restoring and maintaining healthy ecosystems,” according to a 2020 research paper, and proof that marine habitats can be brought back to life in a way that’s self-sustaining.

In the 1930s, a wasting disease swept along the U.S. east coast, wiping out huge swaths of eelgrass. Where Virginia’s coastal bays used to be carpeted in this species of seagrass, suddenly they were barren. “Everyone thought that eelgrass could never, ever get back,” says Robert Orth, who was a marine biologist at the Virginia Institute of Marine Sciences (VIMS) until his retirement this year, “but nobody really started doing any kind of experiments to see.”

That changed in the late 1990s with the discovery of some small patches of seagrass in the bay, the existence of which proved that conditions could once again support the plants.

Orth started with small-scale experiments, digging up adult seagrass from other areas and transplanting it into the bay. The seagrass survived, but the process wasn’t scalable — restoring thousands of acres through transplanting would have been a huge logistical challenge. So, says Orth, “We said, well, why not try to launch a restoration program using seeds?”

In 2001, he started an effort to physically rebuild the ocean ecosystem, seed by seed. From a moving boat, he and his team scattered seeds across four bays: South, Cobb, Spider Crab and Hog Island. The seeds survived, growing into plants which, in turn, produced their own seeds. “Nature kind of took over,” says Orth. “While we continue to put seeds in areas that don’t have eelgrass, nature has been spreading eelgrass naturally.”

Over the last 20 years, supported by an army of volunteers, the project team has sown nearly 75 million seeds. Around 9,000 acres of coastal bays are now blanketed with eelgrass, which has improved water quality, increased marine biodiversity and helped mitigate climate change by capturing and storing carbon.

The project is “game changing,” says Carlos Duarte, a seagrass expert and marine science professor at King Abdullah University of Science and Technology in Saudi Arabia, both in its sheer scale and the raft of long-term data it provides on the climate benefits of seagrass.

A decade ago, Duarte and Orth nicknamed seagrass “the ugly duckling” of environmental conservation, because so few cared about it. That’s slowly changing as the huge benefits it offers are recognized. Despite covering less than 0.2 percent of the ocean, it is responsible for about 10 percent of the ocean’s ability to store carbon. It provides a vital habitat for marine life, boosts commercial fishing, helps purify water, protects coastlines and even traps and stores microplastics.

But seagrass is also one of the most at-risk ecosystems, threatened by coastal development, nutrient runoff from agriculture and stormwater, and rising ocean temperatures.

“I like to say these grasses are sort of the canary in the coal mine,” says Jill Bieri, the Virginia Coast reserve program director at The Nature Conservancy, who has been involved in the restoration for the past seven years. They will thrive if the water quality is good, and die off if it’s not. It’s a lesson for other coastal regions, says Chris Patrick, the VIMS professor who has taken over the project since Orth’s retirement. “If you can fix the water quality issues, you can restore the grass very quickly, within a few decades.”

Restoration projects around the world are looking to Virginia for lessons. Richard Unsworth, associate professor of biosciences at Swansea University, is leading the U.K.’s biggest seagrass restoration project in the waters of Dale Bay in Pembrokeshire, Wales. “We’ve been using their science as a yardstick,” he says. So far he and his team have planted more than a million seeds, but his ambitions are bolder. “We want to apply the techniques that they’re using [in Virginia] to rejuvenate the coastal seas of the U.K., at a similar scale if not bigger.”

Back in Virginia’s bays, the next phase of the project is to see if they can convert the carbon stored in the seagrass meadows into carbon credits to raise money for further restoration. That’s where McGlathery’s work feeds in; the long-term research from the project has allowed her to calculate precise data about how much carbon the seagrass stores. The project is in the process of registering with Verra, a leading certifier of carbon credits. If successful, it will be the world’s first verified seagrass carbon offset program.

In the meantime, the team is working towards restoring every one of the coastal bays to the way they were before the wasting disease claimed the eelgrass. The project, says Unsworth, “is demonstrating to the world that you can actually restore the oceans.” While plenty of projects have restored coastal habitats such as mangroves and salt marshes, he adds, few have been able to restore the ecosystems that lie beneath the surface of the water. “It’s quite fundamental what they achieved.”