"Indigenous People have been stewarding the ocean for thousands of years. This stewardship has appeared in many different forms around the world, all of which represent a reciprocal relationship between humans and the sea rooted in deep place-based knowledge. From octopus houses in Haida Gwaii to fish ponds in Hawaiʻi, an Indigenous mariculture renaissance is making waves as groups across the Pacific seek to revitalize these ancient techniques and traditions.
For the first time, information about a multitude of Indigenous cultivation practices has been collected into a cohesive online repository. Sea Gardens Across the Pacific: Reawakening Ancestral Mariculture Innovations is a new interactive, “living” story map that synthesizes knowledge about Indigenous aquaculture throughout the Pacific region, including the west coasts of North, Central and South America, the east coast of Asia, Australia, Aotearoa New Zealand, Oceania and coastlines in between. The project shows these local initiatives are not one-off projects, but rather pieces of a global story. A story that is being told by Indigenous knowledge holders, and further amplified by diverse collaborators who created the story map."

In collaboration with One Fish Foundation, Slow Fish (of Slow Food USA) is presenting a virtual panel on the AQUAA Act that is pending approval in Congress. Among the panelists is Seaweed Commons' founder Severine Fleming.

"Some of the biggest industrial seafood companies in the world claim the Advancing the Quality of American Aquaculture (AQUAA) Act would provide more “sustainable” domestic seafood to more Americans. Opponents argue that AQUAA would open federal waters to barely regulated massive salmon, seaweed, and other aquaculture farms that could create widespread ecological and socio-economic threats for coastal communities and beyond.

Co-produced by Slow Food USA Policy Committee and Slow Fish North America, this discussion will dive into what the AQUAA Act is, who its supporters and opponents are, and the overall impact this legislation would have on marine environments, domestic and local supply chains, and the decisions we make at seafood counters and restaurants. We’ll hear a range of perspectives on the legislation, and we’ll hear from community-based ocean farmers and local chefs who grow, sell, and serve responsibly harvested shellfish and kelp in their communities."

Alaska Sea Grant hosted a two-hour introductory webinar, held February 2, 2021, as part of the 2021 Seaweed Farm Start-up Training Program for Alaska residents interested in starting their own seaweed farm in Alaska. The series was targeted towards commercial fishermen, Alaska Natives, and fishing communities.

A representative Alaska Fisheries Development Foundation (a non-profit representing harvesters, seafood processors, and the support sector business in Alaska) introduces the Alaska Mariculture Initiative as a partner in this training program.

"When we talk about mariculture, we mean [not finfish farming, but]enhancement, restoration, and farming of shellfish and seaweed."

This is followed by a "Seaweed Farming 101" introduction by the Alaska Sea Grant Hosts, and a great Q&A!

"There is state and federal support for developing Alaska mariculture industries, which could help increase sales of Alaska seaweed, and increase the capacity and capability of new and existing companies involved in purchasing and processing. This guide was developed to help individuals and companies better understand what’s involved as they decide whether to enter the seaweed processing industry, and to provide some industry standards in the manufacturing or processing of kelp."

- Introduction to Seaweed Handling and Processing

Harvesting excerpt: "Timing for harvest is site dependent, with optimal harvesting conditions occurring when increasing water temperatures decrease biomass quality and quantity. It is important for farmers to understand their site characteristics and know when fouling will start to take place. The harvesting period for a given location ends as rapid increases in water temperature lead to development of epifauna—animals that live on and attach to the surfaces of living organisms— and they can attach to the kelp blades, known as fouling." (p. 41)

Processing excerpt: "Kelp is typically clean from a microbial standpoint in its natural habitat. Taking steps to keep it this way throughout harvesting, handling, and processing greatly reduces the chances of contamination. It is easier to keep the kelp clean than to decontaminate it at a later step. Depending on the volume of kelp, cleaning equipment can be a simple plastic tub filled with the cleaning solution, a dunk tank, or an industrial-scale vegetable washing machine." (p. 51)

Bio4Climate's Featured Creature this week is the illustrious Giant Kelp. Their article featured this 7-minute documentary (voiced by David Attenborough) about the biological and climate regulating role of kelp forests and the observable decline of these forests along the Scottish coast. To address this decline, U.K. marine-folk are shaking up the current trowler-traffic rules to push boats further offshore and promote the regeneration of native, wild kelp forests.

Excerpt from the Bio4Climate feature:

*You can subscribe to Bio4Climate's newsletter to get these Featured Creatures in your inbox weekly.

Learn about the state of aquaculture in New England, identification of Aquaculture Opportunity Areas, case studies of aquaculture permitting from other regions, and the federal agency review and authorization process for aquaculture in New England federal waters. Speakers will include NROC OPC Co-Chair Lou Chiarella, NOAA Fisheries; Chris Schillaci, NOAA Fisheries; Christine Jacek, US Army Corps of Engineers; and Eric Nelson, US Environmental Protection Agency. Webinar participants will have an opportunity to ask questions and provide comments following the presentations.

WEBINAR 2 | April 8, 2022 | 9:00 – 11:00 AM
State, Tribal, and Public Perspectives on Improving the Regulatory Process for Aquaculture in New England Federal Waters

This is the type of industrial growth the Seaweed Commons community is concerned about, despite being cloaked in the language of climate change mitigation. 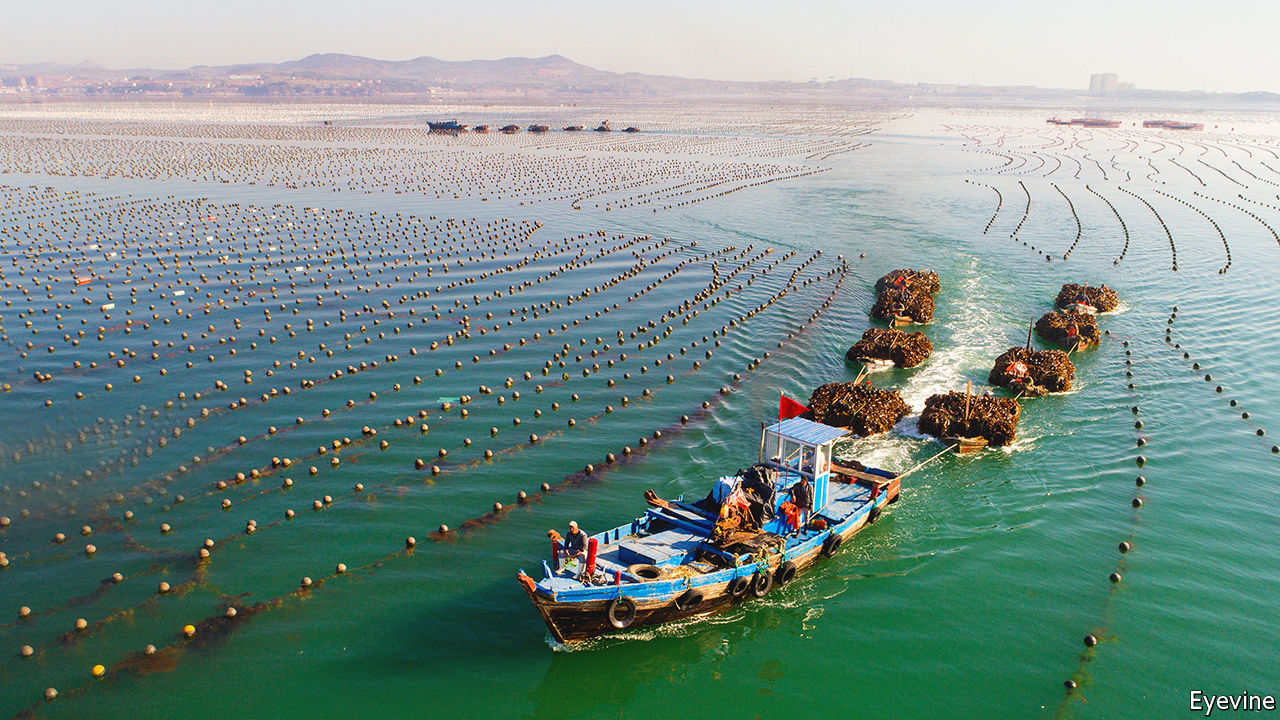 Photo from The Economist original article

"In many places where seaweed used to thrive, often growing in vast “forests”, it is disappearing. The cause is global warming, which, by heating the ocean’s upper layer, reduces its density through thermal expansion—thus making it more buoyant. That extra buoyancy means it is less likely to mix with cooler, denser and more nutrient-rich waters below. This is bad for the marine environment in general. More specifically, it is bad for commercial seaweed farming, a business with revenues of (depending on whom you ask) between $6bn and $40bn a year."

Fantom's article explores how companies are capitalizing on US consumers' small, but expanding awareness and demand for seaweed products.

Touching on its capacity as a carbon sink, use as fertilizer, and potential role as methane-reducing livestock feed, the article mostly focuses on edible seaweed and its rising popularity. While some farms are just getting big (especially with Alaska's current permitting regulations), companies like Atlantic Sea Farms are creating a network of small kelp farms by providing seed and a guaranteed market.

This scaling up or "massification" by means of dispersed farms allows more of a sense of stewardship than large, individually owned farms and acknowledges the skill and knowledge of existing farmers.

Seaweed Commons is still asking questions about sizing up the seaweed industry, though. Even with efforts to empower individual farmers, are we ready for a massive increase in kelp demand? If seed is being distributed from a single entity how will biodiversity and genetic integrity be preserved in our inter-tidal kelp forests? Will scaling-up allow for harvest methods that promote rather than deplete seaweed's carbon storage capacity, habitat creation, and everything else it is already doing to "save the world"?

Long Island chefs are starting to seek out sources for local kelp, and nearby oyster farmers see this as a way to diversify their crop, especially with kelp harvest aligning with the off-season for oysters. Charity Robey talks to chef and author Will Horowitz, aquaculture farmers, and scientists about what a growing Long Island kelp industry could look like, including farmers' takes on the regulations to come.

I’ve had countless chefs, very eager to purchase kelp and also interest from wineries that want to use it on their crops as a fertilizer,” [Paul McCormick] said. “I could see the restaurants out here creating a one-month kelp season and generating enormous interest.”

Kelp will play an important role in developing aquaculture by allowing farmers to diversify their crops and extend their markets, making their businesses much more resilient in times of crisis[...] According to Schott, the DEC and Suffolk County still have a lot of work to do writing regulatory guidelines for processing and selling kelp, but if all goes well, New York farmers will harvest a commercial crop in 2023

Many moons ago, we posted about the Slow Fish 2021 conference hosted by Slow Food last July. Here's the recording of the "Seaweed Industry or Seaweed Commons" panel, moderated by Severine Von Tscharner Fleming and featuring our friend Amanda Swinimer from Dakini Tidal Wilds.

"As moderator Severine Von Tscharner Fleming summed up, in order to establish a seaweed commons and ensure that people take an interest in this crucial topic—and thus exert citizen pressure on authorities—it’s vital to get as many people involved as possible, and as Nalani does, get people in the water. 'Because statistics can be confusing and scary but they’re also easy to ignore. The important thing is for people to develop an emotional bond with marine ecosystems, to care for them.'”

As Amanda Swinimer summarized, 'The most important way we can ensure a respectful and ethical relationship with seaweed, like with any other natural thing, is to share our passion for it with other people, especially young people. That emotional connection is what inspires us to fiercely protect our planet. All life evolved from algae. If we can tap into this ancient connection, we can create a ripple effect and heal our relationship both with nature and each other.'"